BlogRoom regulatorsHeating curve - what is it and how to set it?

Heating curve - what is it and how to set it? Modern home heating is fully controllable. The user only has to introduce appropriate settings according to which individual parameters will be adjusted. One of the most important indicators is the so-called heating curve. In this article you will find out what the heating curve is and how to set it properly.

What is the heating curve?

The available heating curves are curved lines on a graph. The external temperature is marked on the horizontal axis, and the heating supply on the vertical one. The user's task is to choose the right curvature and alternatively move it up or down. The optimum setting of the heating curve is all about maintaining the same temperature inside the building at different outside temperatures. The time spent on configuration pays off in the form of higher thermal comfort and lower heating bills. When it gets colder outside, the controller automatically raises the CH boiler water temperature, thus preventing the rooms from cooling down. 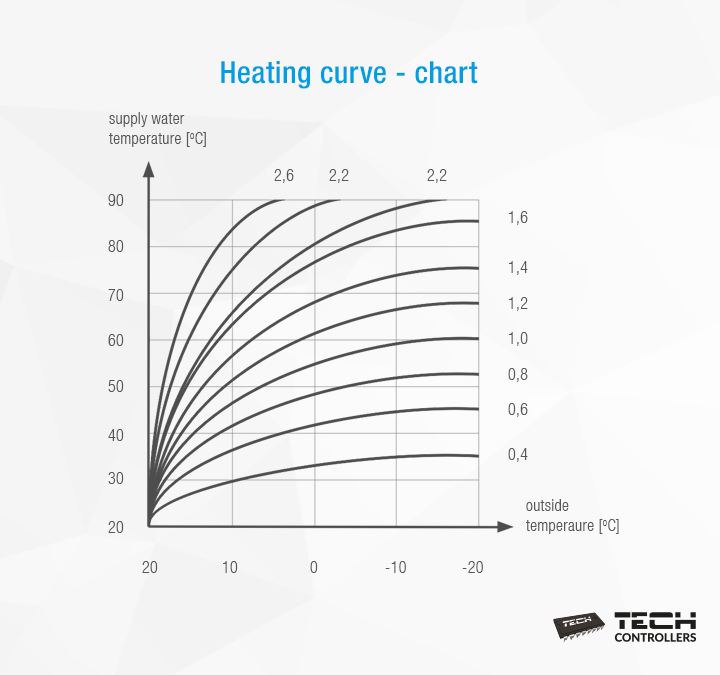 The greater the slope of the heating curve, the warmer the water in the heating system and the greater amount of heat is transferred to the rooms.

Heating curve and the type of heating system 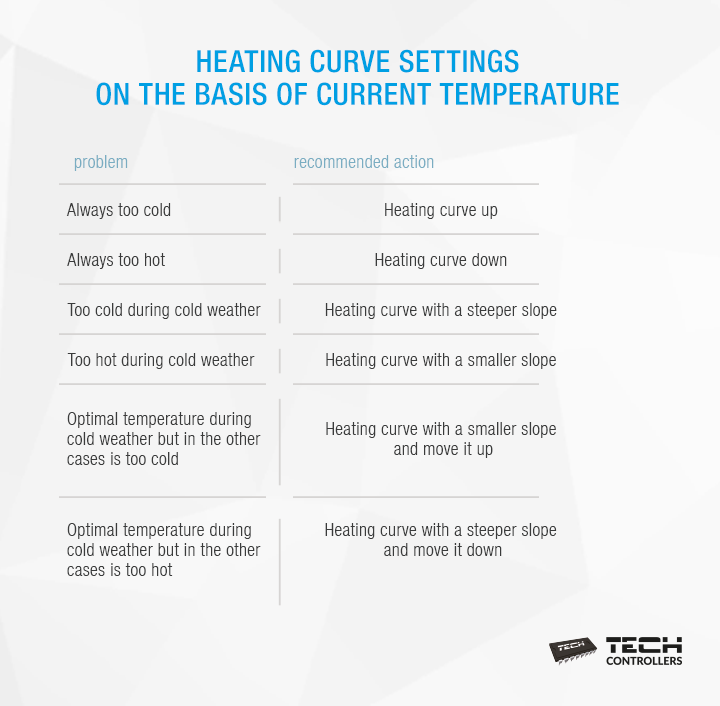 In addition to the outside temperature and the type of heating system, it is also worth considering other factors. These include the thermal inertia of the building, the thermal capacity of the building (depending on the design) and the heat from sunlight. Both the changes which involve shifting the curve as well as adjusting its slope should be made gradually (one degree at a time), followed by observation of how the thermal comfort changes in the rooms.

Heating curve in heating controllers made by TECH CONTROLLERS

In TECH Controllers devices, weather-based control is possible in CH boiler controllers, as well as controllers for systems supporting a mixing valve. Setting the right temperature depends on the outside temperature and it is performed using a valve. The heating curve is constructed based on four pre-set temperature values. For the valve to operate correctly, the user defines the pre-set temperature (downstream of the valve) for 4 intermediate external temperatures: -20° C, -10° C, 0° C, 10° C. Each increase or decrease in temperature shifts the curve by a given value. There is a relationship between the number of points constructing the curve and the system accuracy: the more points are used to construct the curve, the greater its precision. Four points, in the case of TECH controllers, seem a very good compromise ensuring decent accuracy and easiness of setting the course of this curve.
In order for the weather-based control to work effectively, the external sensor mustn't be exposed to sunlight or influenced by the weather conditions. After it has been installed in an appropriate place, weather control function needs to be activated in the controller menu.

Weather-based control for your everyday comfort

Weather-based control of the operation and efficiency of heating devices offers completely new possibilities. Thanks to such control, the CH water temperature does not rise excessively and the whole system achieves much higher efficiency. It is assumed that on average, each increase in temperature inside the building by 1 °C increases fuel consumption of the CH boiler by as much as 6%. For this reason, it is sensible to strive to set the heating curve as low as possible to ensure thermal comfort in the building. However, it is worth remembering that the weather-based controller can only change one parameter common to the whole building, namely the CH water temperature. Modern room regulators, on the other hand, respond to temperature changes inside the building. The signal from the room regulator can correct the current valve temperature calculated by the controller and lower this temperature by a user-defined value.

TECH drivers-warmth in your home