TECH’s controllers may be divided into three groups due to the type of the output signal controlling the flow:

The results of tests conducted on a charging boiler with the use of a controller with a non-continuous output signal (two-state-on/off) as well as with a zPID controller are presented below. 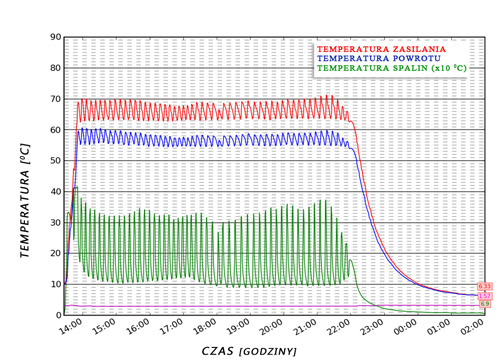 An ST-81 controller with hysteresis of 2°C. Oscillations around the set value typical of two-state adjustment. If the boiler is reacting to temperature changes too slowly, the deviation (up or down) as compared to the set value may be too high. The negation of the application of this control in CH boilers would be an overstatement. In most cases, these regulators can handle the heating of buildings well and the accuracy of maintaining the set temperature is satisfactory. 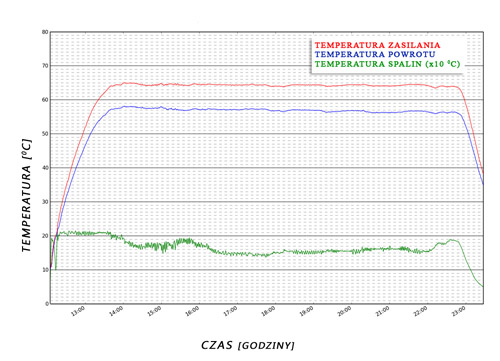 The ST-81 zPID controller. The first overregulation taking place after firing up in the boiler may be seen in the diagram. Then, our regulator handles the maintenance of set temperature on the boiler very well. The adjustment is smooth, the measured temperature remains at the set level despite the instability of the adjustment’s object, namely the CH boiler and the heated building. The curve below the supply and return temperature presents the temperature of flue gas measured on the boiler’s outlet. This is the second basic parameter used for adjustment, apart from the set temperature.